With Tesla Motors Inc. teetering between two key technical levels, chart watchers say the electric-car maker’s earnings report could determine whether the stock speeds higher, or crashes, by as much as 40% over the next couple months.
Tesla is technically still in a bull market, chart watchers say, but the recent jolt the stock suffered has some wondering whether the five-fold run so far this year is finally coming to an end.

Tesla dropped 17% in October, the biggest correction since the 27% bear-market slide ending August 2012. The rule of thumb on Wall Street is a decline of up to 20% is a correction, while selloffs are 20% or more are bear markets.
The correction has set up two potential scenarios for the stock.

On a short-term basis, the stock is in the process of forming a “bullish double-bottom,” or “W,” pattern, said Adam Sarhan, chief executive officer of Sarhan Capital. The two bottoms are the Oct. 9 intraday low of $161.50 and the Oct. 29 low of $153.

That would suggest a rally to an initial target between the Sept. 30 all-time intraday high of $194.50 and the psychologically-significant $200 level, Mr. Sarhan said. Above that, he feels the $250 level, which is about 44% above current levels, “would be a reasonable target by the end of the year,” he said.
If Tesla’s results disappoint, however, the key level to watch is the Oct. 29 intraday low of $153, which at the time was the lowest level seen in over two months. 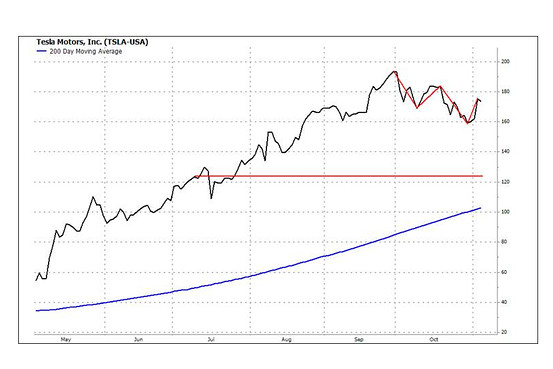 “If the stock takes that support out, I would say $125 would be the next area I’m watching,” Mr. Sarhan said, which had previously acted as a resistance level in July.

Below that, he sees the 200-day moving average line, which many chart watchers uses as a proxy for the long-term trend, as the next target. That line currently extends to $102.77, or 41% below current levels.
The stock was down 0.7% at $174.03 in recent trading.

The electric-car maker is expected to report after Tuesday’s close third-quarter earnings of 8 cents a share on revenue of $547.5 million, according to FactSet.

For the second quarter, analysts were expecting a loss of 18 cents a share, but Tesla came through with a profit of 20 cents a share, and the stock soared 14% in a day.

Although the stock has already rallied as much as it has this year, Mr. Sarhan said he is leaning toward the bullish scenario, as the stock has “earned the right” to be given the benefit of the doubt.
But if Tesla misses estimates and key support breaks, a lot of technicians and investors could quickly jump off the bullish bandwagon, he said.