Wednesday Jan 13, 2016 4:00pm EST
U.S. stocks closed sharply lower Wednesday, pressured by low oil prices, as concerns about global economic slowdown weighed ahead of major earnings reports.
The S&P 500 closed down 2.5 percent, ending below the psychologically key 1,900 level for the first time since Sept. 29. The index fell below that level in intraday trade for the first time since Oct. 2, 2015. Consumer discretionary was the greatest declining sector.
All three U.S. averages closed more than 10 percent below their 52-week intraday highs, in correction territory.
“It started with crude just weakening a little bit. Everyone’s so afraid of this earnings season they’re pre-selling it,” said JJ Kinahan, chief strategist at TD Ameritrade.
He noted selling accelerated as the S&P 500 gave up gains for the day and turned lower in late-morning trade. The VIX also climbed, holding near 25 in the close.
Chatter about stress in the hedge fund community contributed to the selling pressure while traders also noted a certain flight to safety.
Treasury yields fell, with the 10-year yield hitting its lowest since late October and the 2-year yield touching its lowest since mid-December.
Stocks opened higher but quickly turned lower as oil gave up initial gains following inventory data.
The Dow Jones industrial average ended about 365 points lower after briefly falling 393 points in afternoon trade, with Home Depot one of the greatest contributors to losses. Goldman Sachs and Boeing were also among the top contributors to declines.
The Dow transports closed down 3.68 percent at their lowest level in more than two years.
Oil prices remained near their lowest in more than a decade.
WTI crude oil futures settled up 4 cents, or 0.13 percent, at $30.48 a barrel. WTI briefly fell below the psychologically key $30 level Tuesday and hit a fresh 12-year low.
Brent briefly fell below $30 a barrel in intraday trade Wednesday and settled at $30.31 a barrel, the first close below U.S. crude since Dec. 30, 2015.
“There’s basically no buying, which is part of the problem,” said Jeremy Klein, chief market strategist at FBN Securities.
“You’re going to need some buyers to come in. Earnings is going to be an opportunity to do that,” he said, also noting some volatility ahead of options expiration on Friday.
Read MoreFANG stumble bad omen for market?: Free preview
“The fear of a slowing economy is taking over,” said Adam Sarhan, CEO of Sarhan Capital.
“The fact that we erased gains and can’t rally from deeply oversold conditions tells you everything you need to know about this market,” he said.
The Nasdaq composite underperformed, closing down 3.4 percent, as Amazon fell 5.8 percent and the iShares Nasdaq Biotechnology ETF (IBB) lost 5.4 percent. Apple turned lower to close nearly 2.6 percent lower.
Netflix closed down almost 8.6 percent. Netflix and Amazon both more than doubled in 2015 as the top performers in the S&P 500.
Some traders also said a factor behind the declines in stocks was news that brewing giant AB InBev has launched a $46 billion seven-tranche bond, the second biggest corporate bond on record, market sources told IFR on Wednesday.
“I think it’s just wait and see now until the bank earnings come in,” said Marc Chaikin, CEO of Chaikin Analytics.
“The mood is pretty sour on Wall Street. I think people are using rallies as opportunities to raise cash,” he said, noting resistance in the S&P 500 at 1,950.
JPMorgan Chase earnings are expected Thursday before the opening bell.
Energy fell 1.78 percent after initially attempting to trade higher. Oil gave up earlier gains of more than 3 percent after weekly U.S. crude inventory data showed a build of 234,000 barrels and a rise of 8.4 million barrels of gasoline, according to Dow Jones.
The iShares MSCI Emerging Markets ETF (EEM) closed down 1.05 percent after earlier trying for gains.
“I think the EEM is a good proxy for stability outside the U.S. and threat to growth,” said Ilya Feygin, managing director and senior strategist at WallachBeth Capital.
The market is going to “focus on oil, China, and is there a threat to global growth?” he said.
European stocks pared gains to end mixed. U.S. stocks opened higher Wednesday, helped by recovery in oil prices and Chinese data overnight.
China’s crude oil imports hit a record high in December, while copper imports were the second highest on record, according to customs data.
Overall Chinese exports and imports fell by less than expected in December, leaving a trade surplus of over $60 billion for the month, the data showed. The economy likely had its weakest annual growth in 25 years. China GDP data is expected next week.
The Chinese yuan held steady for a fourth-straight day, with the People’s Bank of China setting the yuan midpoint fix against the U.S. dollar at 6.5630, compared to yesterday’s fix of 6.5628.
Read MoreChina opens new front in war on yuan speculators
“Just more stability coming out of the Far East. Some stability coming into the yuan,” said Mark Luschini, chief investment strategist at Janney Montgomery Scott.
“We had a rebound yesterday that was decent. Some of the market internals weren’t strong,” Luschini said. “The question will be, can it carry through (Wednesday)?”
Devaluation in the yuan against the dollar last week and speculation of significant weakening in the currency weighed heavily on U.S. stocks last week. 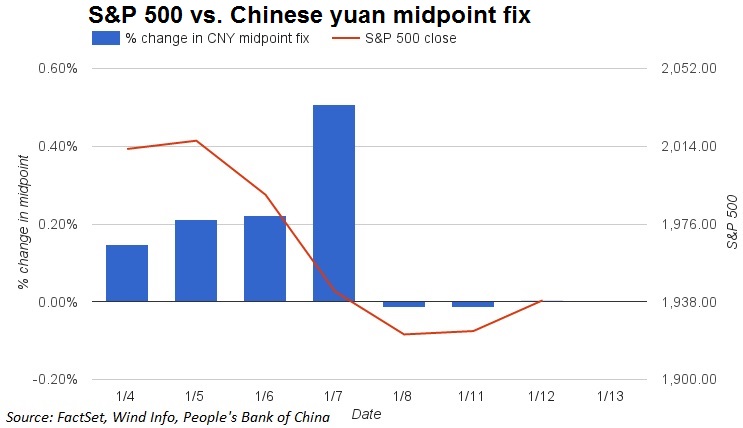 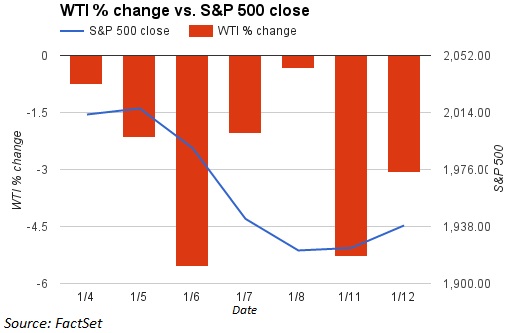 Start typing to see posts you are looking for.