* Nov jobs report comes in well ahead of expectations
* Financials lead on the day, energy falls again
* American Eagle tumbles after outlook, results
* Indexes up: Dow 0.4 pct, S&P 0.3 pct, Nasdaq 0.4 pct (Updates to midday trading)
By Ryan Vlastelica
NEW YORK, Dec 5 (Reuters) – U.S. stocks rose on Friday, with the Dow and S&P 500 on track for their seventh straight weekly advance after the November jobs report came in much stronger than anticipated, boosting banks and other sectors tied to the pace of growth.
While crude oil continued its recent decline, weighing on energy shares, the gains were widespread, with market weakness concentrated in defensive sectors, which underperform in periods of economic expansion.
Payrolls rose by 321,000 in November, the largest number in nearly three years and way above the 230,000 estimated, while the unemployment rate held steady at 5.8 percent, a six-year low.
While the report blew past forecasts, it also raised expectations that a rate hike from the Federal Reserve may materialize sooner than previously thought.
Financials led the day’s gains, up 1.2 percent as higher interest rates would prop up earnings in the sector. Bank of America rose 2.8 percent to $17.70 while Goldman Sachs was up 2.4 percent to $196.50, boosting the Dow.
Utilities, a dividend play, fell 1.1 percent as Treasuries yields rose. Energy fell 0.5 percent alongside a 1.1 percent drop in crude prices.
“This report solidifies the idea that the economy is getting stronger, and the more economic activity on Main Street, the better it will be for financials,” said Adam Sarhan, chief executive of Sarhan Capital in New York.
“The economy doing well is win-win-win across the board for financials, because it means more lending, more economic activity, and with markets at highs, brokers are getting more in commission and this and that. Financials are poised to move much higher.”
Not everything was rosy, however, as new orders for U.S. factory goods fell for a third straight month in October, pointing to a slowdown in manufacturing activity.
At 12:54 p.m. (1754 GMT) the Dow Jones industrial average rose 79.31 points, or 0.44 percent, to 17,979.41, the S&P 500 gained 6.47 points, or 0.31 percent, to 2,078.39 and the Nasdaq Composite added 17.08 points, or 0.36 percent, to 4,786.52.
The Dow hit a record high and, alongside the S&P 500, was on track for a seventh week of gains, a streak not seen in a year for both. The Nasdaq Composite is slightly lower so far this week.
American Eagle Outfitters fell 14 percent to $11.82 after the teen apparel retailer forecast a current-quarter profit below analysts’ estimates and reported its fifth straight drop in quarterly income.
Advancing issues outnumbered decliners on the NYSE by 1,738 to 1,300, for a 1.34-to-1 ratio; on the Nasdaq, 1,831 issues rose and 832 fell, for a 2.20-to-1 ratio.
The S&P 500 was posting 91 new 52-week highs and 10 new lows; the Nasdaq Composite was recording 155 new highs and 77 new lows.
Source: http://www.reuters.com/article/2014/12/05/markets-stocks-usa-idUSL2N0TP1FE20141205

Adam In CNBC: Dow notches 17th record close since US election, ends about 25 points away from 20,000

Stocks rose on Tuesday, led by financials, as investors remained unfazed by geopolitical tensions, while the Dow Jones industrial average kept marching toward 20,000.
At session highs, the blue-chips index came within 13 points of hitting the milestone mark, before closing 90 points higher, after hitting a new intraday high, with Goldman Sachs contributing the most gains. The Dow also ended around 25 points away from 20,000.
“We have to put this move into perspective,” said Adam Sarhan, CEO at 50 Park Investments. “It’s not just about hitting 20,000. We’ve had a very strong rally since the election.” Since Nov. 8, the Dow has surged more than 8 percent and has posted 17 record closes.
The S&P 500 rose 0.3 percent, with financials rising more than 1 percent. The Nasdaq composite advanced 0.5 percent, also reaching a new all-time high earlier in the session.
“I think the reason we came out higher is because there was no economic data and volume is pretty light,” said Peter Cardillo, chief market economist at First Standard Financial. “The absence of any macro news has given the bulls total control of the market today.”
Art Hogan, chief market strategist at Wunderlich Securities, said “you’ll be hard pressed to find a catalyst … until we flip the calendar.” “We’re running out of things that can trip us up.”
The U.S. composite volume totaled 6.17 billion shares on Monday, the lowest since Nov. 25, when only 3 billion shares were traded, as the Christmas holiday approached. “As we go deeper into the week, the volume will continue to fall off,” said said Quincy Krosby, market strategist at Prudential Financial. “That’s important because any strong headline can skew the market in one direction or another.” 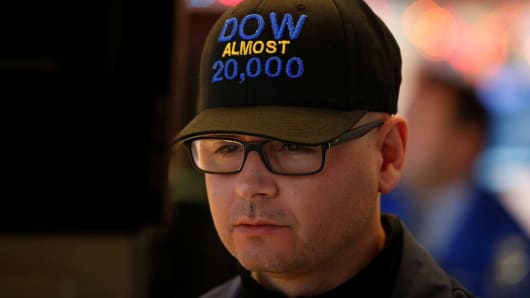 Brendan McDermid | Reuters
Specialist trader Mario Picone wears a “DOW Almost 20,000” cap as he works at his post on the floor of the New York Stock Exchange (NYSE) in New York City, U.S., December 15, 2016.
First Standard’s Cardillo also said investors were ignoring geopolitical tensions. On Monday, the Russian ambassador to Turkey died after being shot by a gunman at an art gallery in the Turkish capital. Meanwhile, in Berlin, a truck ploughed into a crowded Christmas market, killing 12 and injuring 48.
“That’s the hallmark of a bull market. When the market refuses to fall on ‘bearish news,’ that tells you that this is very strong bull market,” said 50 Park’s Sarhan.
European equities traded mostly higher Tuesday, as the pan-European Stoxx 600 index rose 0.48 percent. “If the pattern is something we’ve seen before, the market is going to look right through it,” said Prudential’s Krosby.
There are no major economic data due Tuesday, but investors had several earnings reports to chew on, with the likes of Darden Restaurants, General Mills and BlackBerry all reporting before the bell. FedEx and Nike are also scheduled to report after the close.
“Along with [Oracle], which delivered their earnings last week, and [Accenture], which will do the same tomorrow morning, these releases will offer a good preview for the upcoming reporting season,” Jeremy Klein, chief market strategist at FBN Securities, said in a note, referring to Nike and FedEx’s results.
Analysts polled by Reuters expect Dow-component Nike to report earnings per share of 43 cents on sales of 8.1 billion. FedEx is expected to post profits of $2.90 per share on revenue of $14.92 billion.
U.S. Treasurys resumed their sell-off after a slight uptick following the events in Ankara and Berlin, with the benchmark 10-year note yield rising to 2.5597 percent and the short-term two-year note yielding 1.2326 percent.
The dollar rose 0.12 percent against a basket of currencies, with the euro trading at $1.039 and the yen near 117.8.
In oil markets, U.S. crude rose 0.21 percent to settle at $52.23 per barrel amid expectations for falling U.S. stockpiles.
The Dow Jones industrial average rose 91.56 points, or 0.46 percent, to end at 19,974.62, with Nike leading advancers and Merck the top decliner.
The S&P 500 gained 8.23 points, or 0.36 percent, to 2,270.76, with financials leading eight sectors higher and consumer staples the biggest decliner.
The Nasdaq composite advanced 26.50 points, or 0.49 percent, to end at 5,483.94.
About two stocks advanced for every decliner at the New York Stock Exchange, with an exchange volume of 783.44 million and a composite volume of 3.221 billion at the close.
The CBOE Volatility Index (VIX), widely considered the best gauge of fear in the market, traded near 11.4.
—CNBC’s Sam Meredith and Christopher Hayes contributed to this report.
On tap this week:
Tuesday
No reports expected
Wednesday
10:00 a.m. Existing home sales
Thursday
8:30 a.m. Initial claims
8:30 a.m. Durable goods
8:30 a.m. Real GDP
9:00 a.m. FHFA HPI
10:00 a.m. Personal income
Friday
10:00 a.m. New home sales
10:00 a.m. Consumer sentiment
*Planner subject to change.