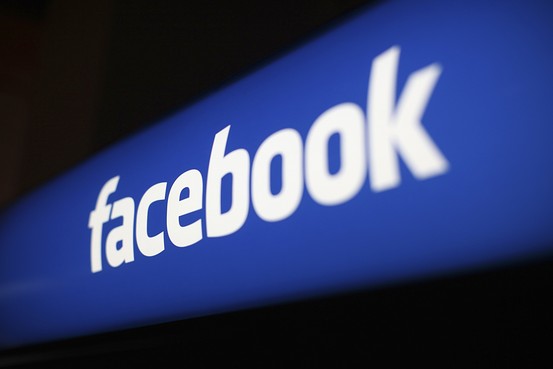 Investors may be wondering if they have missed the boat after a 30% one-day surge in Facebook Inc.’sshares. But chart-watchers say that while there could be a short-term pullback, there is plenty more room to run to new highs.
On Thursday, Facebook ran up to $34.36, the highest close seen since the stock debuted 14 months ago, after the social network’s second-quarter results exceeded expectations handily amid surprising strength in its mobile-advertising business. Volume of about 365.9 million shares was more than 10 times the 30-day average.
The stock’s leap left a large gap in the chart between Wednesday’s intraday high of $26.53 and Thursday’s low of $32.75. That gap higher helped the stock to break away from downward channel the stock was following this year. 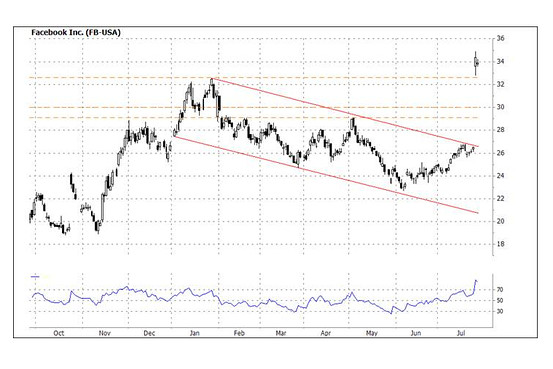 “A big breakaway gap tends to bode well for the stock over the long term,” said Adam Sarhan, founder and chief executive officer of Sarhan Capital. “They tend to signal the beginning of a large move higher.”
And technicians say investors shouldn’t worry too much about a significant reversal back into the gap.
The reason is that chart-watchers see the jump higher as a breakaway gap. Such moves occur on heavy volume in the opposite direction of the previous trend, or after a long consolidation period, while exhaustions occur in the same direction of a longer-term established trend, according to the Market Technicians Association.
“Breakaway gaps typically do not get filled,” said Edward Painvin, chief investment officer at Chase Investment Counsel. “And this is clearly a breakaway gap.”
Similar price gaps in the charts of Netflix Inc. in January and April of this year LinkedIn Corp. in February and Tesla Motors Inc. in May all preceded further gains to new highs, technicians noted. The Netflix chart is below: 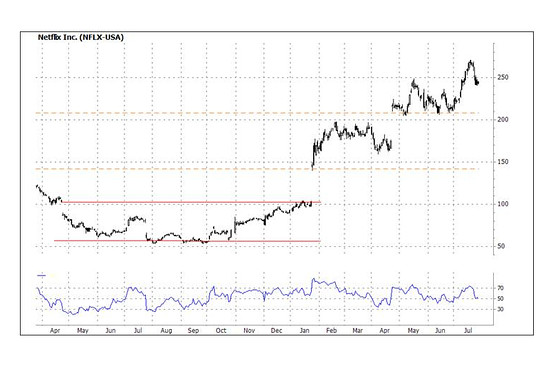 Meanwhile, those further gains tended to follow either a short consolidation period or a shallow pullback.
Terence Gabriel, global head of technical analysis at IDEAglobal, said when there are price gaps of this size, the shorter-term momentum indicators tend to jump to “overbought extremes.”
For example, the Relative Strength Index, which measures the magnitude of daily gains against daily losses, ended Thursday at all-time high of 88.28. That’s well above what technicians see as the “overbought” threshold of 70.
“That makes it very hard [for investors] to step into something that has gapped up that much,” Gabriel said, “without some backing and filling to alleviate some of that overbought condition.”
Overbought readings and can be worked off quickly with just minor weakness or a short period of range trading, chart watchers noted, like they were with Netflix, LinkedIn and Tesla.
Facebook was down 1.6% to $33.81 in morning trading on Friday while the Relative Strength Index was down to 84.15.
If there is some further weakness, Chase Investment’s Painvin said support should start at the January 2013 highs around $32.50.
Below that, IDEAglobal’s Gabriel said the $29 to $30 range would be a good level for buyers to step in. That level includes previous resistance at the May 3 high of $29.07, while the 50% retracement level of the chart gap created Thursday is at $29.64.
Once the new uptrend asserts itself, Painvin said he expects some resistance at Facebook’s initial public offering price of $38.
But that’s not likely to hold the stock down for too long, technicians say. There’s more to Facebook’s bullish outlook than just a big technical gap up, said Sarhan Capital’s Sarhan. He thinks the stock will eventually clear its all-time high of $45 seen on its first day of trading on May 18, 2012.
“The earnings report was a game changer” for the stock, Sarhan said, as it shows the company has figured out how to “monetize its users and keep growing.”
Source: http://blogs.wsj.com/moneybeat/2013/07/26/facebooks-breakaway-gap-is-bullish-game-changer/tab/print/?KEYWORDS=adam+sarhan