Week-In-Review: Bullish Action Ahead Of The Long Weekend 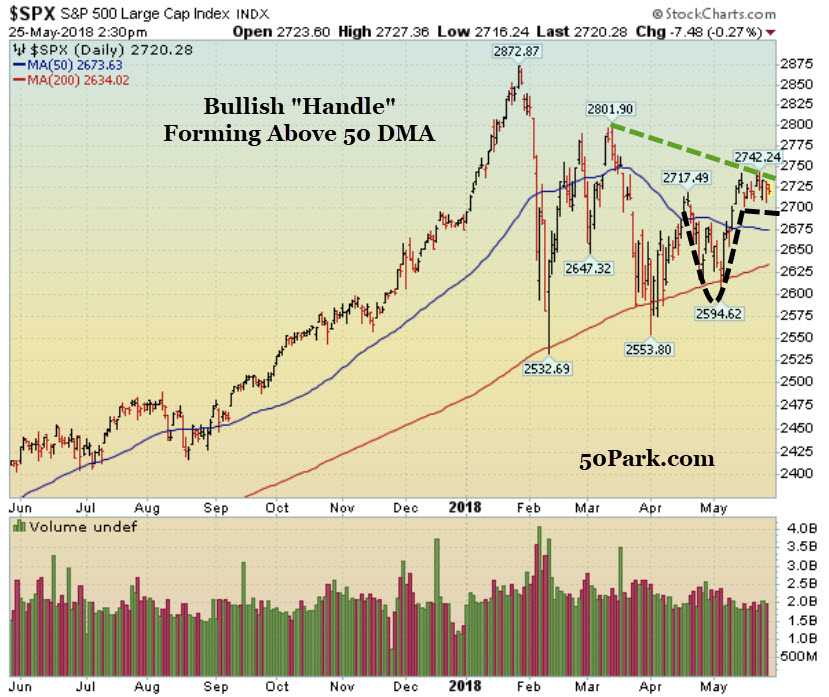 Bullish Action Ahead Of The Long Weekend

The market had every chance in the world to fall last week and the fact that it didn’t is very bullish. Remember, it’s not the news that matters but how the market reacts to the news. When a market doesn’t fall on bearish news that is a bullish event and when a market can’t rally on bullish news that is a bearish event. Right now, the small-cap Russell 2000 is trading at a new all-time high which is also bullish for the broader market. The other popular indices are all tracing out a bullish “handle” just above their respective 50 DMA lines. Near-term support is the 50 DMA line and as long as that level is defended, odds favor higher prices will follow. Moreover, one or two “good” days and the market can easily begin a new leg higher. The bulls remain in clear control until any serious selling shows up.

Stocks opened higher on Monday after Treasury Secretary Steven Mnuchin said the so-called trade war with China is placed ‘on hold.’ The U.S. suspended its threat to impose tariffs on $150 billion in Chinese imports while the negotiations with China continue. President Trump does have the option to impose the tariffs if he’s not happy with the way things are moving along. On Tuesday, stocks fell 200 points after President Trump said the North Korea summit may not happen and that he was not happy with China’s trade talks. In other news, retailers were mixed to mostly lower after Kohl’s reported earnings. On Wednesday, stocks fell at the open but turned higher after the Fed minutes were released. Overnight, the so-called “risk-off” trade spread in Asia and the Turkish Lira plunged. Buyers showed up in the U.S. and protected support (50 DMA line for the major indices). Additionally, the Fed minutes came out and they were more dovish than expected and that helped lift the market. The Fed said it is willing to let inflation run above 2% for a while which is its way of saying, “easy money is here to stay.”

On Thursday, stocks fell after Trump canceled the meeting with North Korea and the Commerce Department began looking into importing auto parts. In a bullish turn of events, stocks rallied back mid-day and the small-cap Russell 2000 actually closed higher. The fact the market didn’t fall on this bearish news is a bullish event. Remember, it’s not the news that matters, but how the market reacts to the news. So far, the action remains bullish. Stocks were quiet on Friday ahead of the long holiday weekend.

The small-cap Russell 2000 hit a new high which is bullish for the broader market. The other indices are tracing out a bullish handle and trading between important resistance (2018’s high) and important support (February’s low). Until either level is broken, I have to expect this sloppy, sideways action to continue. On the downside, the big level of support to watch is the 200 DMA line and then February’s low. For now, as long as those levels hold, the longer-term uptrend remains intact. Conversely, if those levels break, look out below. On the upside, resistance is now 2018’s high.  As always, keep your losses small and never argue with the tape. Free Special Report: Want A Bargain? 3 Cheap Stocks That Are About To Breakout