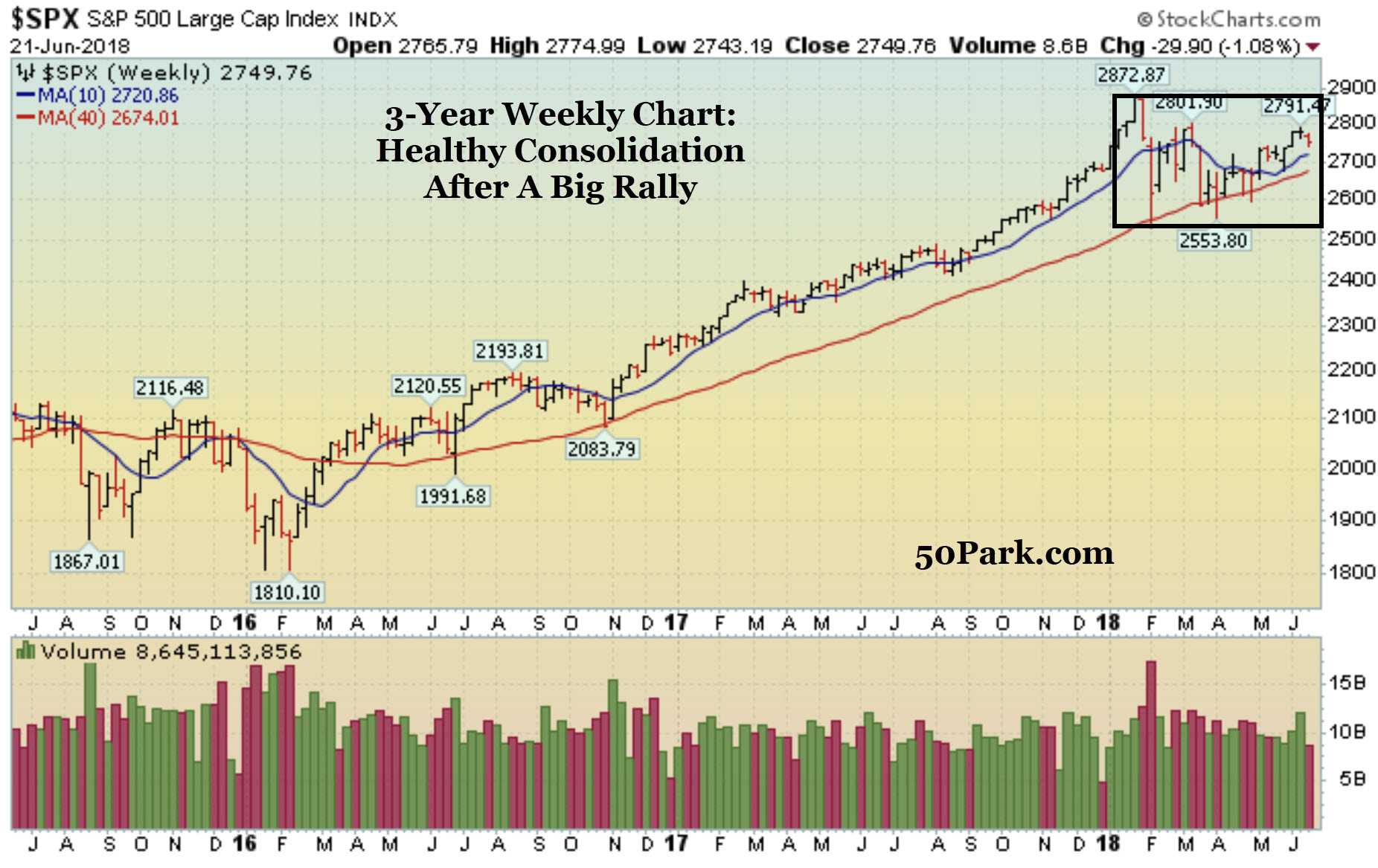 The major indices ended mostly lower last week amid the ongoing trade woes. In the first half of the week, President Trump said he will consider adding tariffs on nearly $200 billion worth of Chinese goods. A few days later, China responded by saying, the US has “delusions” regarding the trade war. It is important to put the on going trade dispute between the two economic powerhouses in the proper context. Here are some facts: The US economy is roughly $19T and currently, China only imports $130B of goods from the US. Meanwhile, the US imports $505B from China.  That’s why the administration is doing what it is doing. From my point of view, the only thing that matters is what does all this mean for capital markets? Stepping back, this is mostly noise until we see definitive action. Recently, the Dow has been lagging because it is the most sensitive to the ongoing trade woes. So far, the market – and leading stocks- continue acting well and that tells me everything I want to know. In the short-term the major indices are extended and are pulling back. They key now is to analyze the health of this pullback then go from there. Keep in mind we are approaching the end of the month and the end of the quarter which usually has a slightly upward bias.

Stocks ended mixed on Monday as the Dow and S&P 500 fell but the Nasdaq managed a small gain. The market opened lower after concern grew regarding a potential global trade war. After the close, President Trump said he is prepared to announce tariffs on $200B worth of Chinese goods. Overnight, global equity markets plunged and stocks opened lower on Tuesday. Once again, by the close, the market ended in the middle to upper half of its range which is a somewhat bullish sign. Wednesday was a relatively quiet session. Stocks opened higher on Wednesday but the Dow quickly gave back its gains and turned lower. Separately, Disney raised its bid for Twenty-First Century Fox assets to $38 per share, or $71.3 billion. That was higher than Comcast’s offer of $65 billion in cash for the Fox assets which include FX, Star TV and stakes in Sky.

Stocks fell on Thursday on lingering trade concerns. The Dow Jones Industrial Average fell by nearly 200 points and extended its losing streak to 8 days. The last time the Dow fell 9 consecutive days was 40 years ago. Separately,
e-commerce stocks fell on Thursday, after the U.S. Supreme Court allowed states to collect taxes from retailers that do not have a physical presence there. That is a big game changer for the entire e-commerce industry. Stocks were quiet on Friday with the only big headline coming from OPEC. OPEC decided to raise production slightly to help with the oil market.

The major indices are pulling back after the Nasdaq and Russell 2000 both just hit fresh record highs. The Dow & S&P 500 are lagging as they are more impacted by global trade woes. On the downside, the big level of support to watch is the 200 DMA line and then February’s low. For now, as long as those levels hold, the longer-term uptrend remains intact. Conversely, if those levels break, look out below.  As always, keep your losses small and never argue with the tape. Free Special Report: Want A Bargain? 3 Cheap Stocks That Are About To Breakout