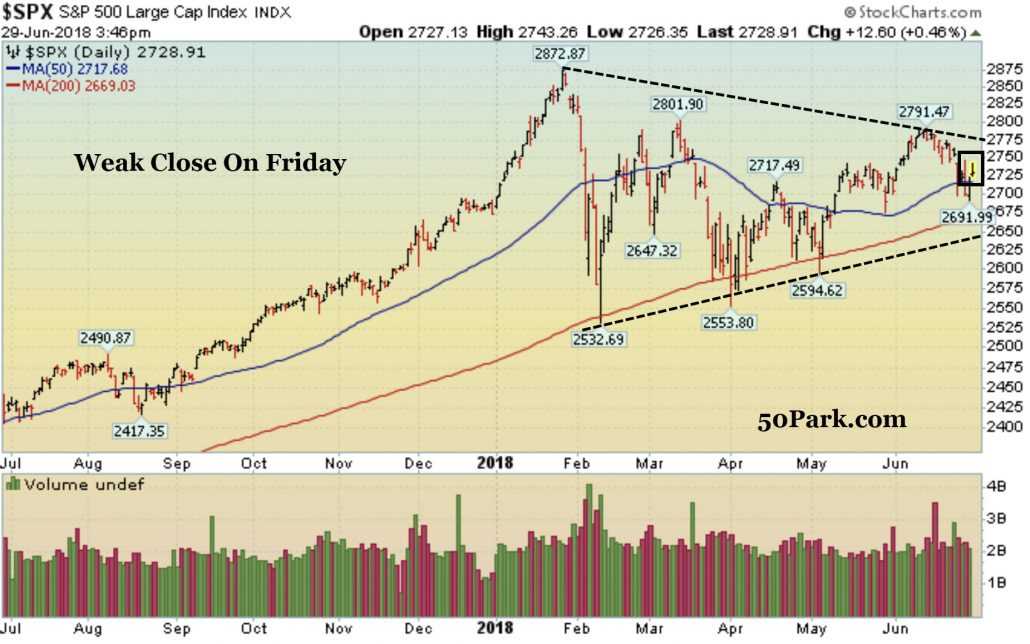 Friday was the last trading day for the month and quarter. After the dust settled the market ended mixed for the month and slightly higher for the quarter. The big theme for Q2 was a bifurcated market whereby we saw strength in the Small Cap Russell 2000 and the tech-heavy Nasdaq 100 and relative weakness in the Dow Jones Industrial Average and the benchmark S&P 500. The overarching concern for most of the quarter was the ongoing dialogue with respect to global trade from the White House. The White House wants to even the playing field and is not afraid to take decisive action to do so. Meanwhile, global economic partners want to preserve the status quo and threatened retaliation. So far, it has been a lot of rhetoric and not a lot of action. That is a net positive for stocks. Technically, the major indices are doing their best to defend major support. As long as support holds, higher prices will likely follow. Conversely, if support breaks, I have to expect the market to retest February’s low.

Stocks fell hard on Monday after The Wall Street Journal reported Sunday night that President Trump wants to limit Chinese investments in US Tech companies. The move caught people off guard but during the day on Monday Steven Munchin, Secretary of Treasury, tweeted that the news is fake. Munchin said, “On behalf of @realDonaldTrump, the stories on investment restrictions in Bloomberg & WSJ are false, fake news. The leaker either doesn’t exist or know the subject very well. Statement will be out not specific to China, but to all countries that are trying to steal our technology.” The market didn’t care and the damage was pretty severe. On Tuesday, stocks bounced back a little but closed in the middle of the daily range (not the best sign). The Dow was up about 285 points on Wednesday after the White House said it will use existing laws to curb Chinese Investments in US tech stocks and not go after alternate options. That was received well intra-day but sellers showed up by the closed, erased the big gains for the day and closed in the red. That big negative reversal was not a good sign.

Stocks opened lower but closed higher on Thursday after the bulls showed up and defended major support for the market. The Dow is flirting with its longer-term 200 DMA line and the S&P 500 and the Nasdaq are flirting with their 50 DMA lines. The market is still a little weak and needs a good boost to shake off this recent bout of weakness. Stocks were relatively quiet on Friday which was the last full trading day for the month and quarter.

The major indices are pulling back after the Nasdaq and Russell 2000 both just hit fresh record highs. The Dow & S&P 500 are lagging as they are more impacted by global trade woes. On the downside, the big level of support to watch is the 200 DMA line and then February’s low. For now, as long as those levels hold, the longer-term uptrend remains intact. Conversely, if those levels break, look out below.  As always, keep your losses small and never argue with the tape. Free Special Report: Want A Bargain? 3 Cheap Stocks That Are About To Breakout