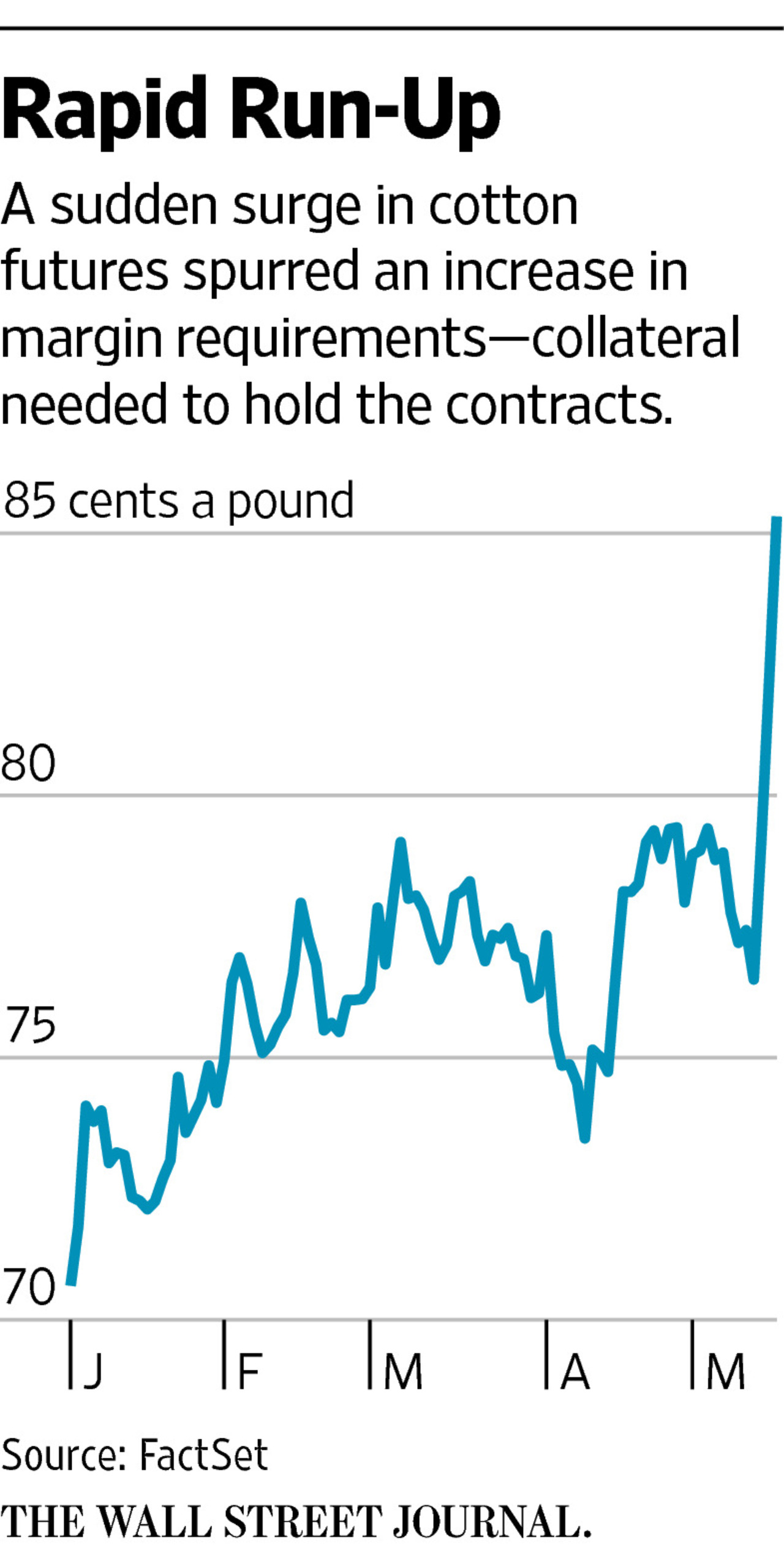 Cotton futures have jumped 12% over three sessions, throwing the finances of textile mills and fiber merchants around the globe into disarray.
Speculators have been driving up the price, analysts say, following a government report last week showing a tightening in cotton supply. That triggered the largest three-day rally in the commodity since December 2010, with prices rising nearly 4% on Monday to 85.32 cents a pound.
After cotton futures topped their trading limits on both Friday and Monday, the Intercontinental Exchange after each session increased margin requirements, or the amount of money that buyers and sellers must put down as collateral to guarantee trades.
Increasing margin requirements is a tool used during periods of rapid run-ups caused by speculators. Exchanges hope to force traders who don’t have the money to guarantee their positions to unwind from those trades.
The rapid increase in prices may force some cotton users to cancel sales or pay up for the fiber, industry analysts say. The price surge is disrupting the industry during a crucial time in the crop cycle for U.S. cotton, when there will be no new cotton on hand for several months as farmers begin to plant for the next harvest, which begins in July and extends to November.
Many cotton buyers entered into contracts last year to purchase U.S. cotton at a price to be determined at a later date, a common practice in the business. Most were bearish on cotton prices and figured they could pay a cheaper price in the future.
But cotton prices have jumped 30% since September, and mills are running out of time for them to come back down.

Cotton merchants who sold cotton on call to mills have been waiting on the mills to fix those sales to a price in the futures market. There are 4.62 million bales whose price to complete the sale is yet to be determined. That amount is a record for this time of year, according to figures from the U.S. Commodity Futures Trading Commission.
Some users now face cotton prices that are 20 cents a pound, or about 30%, higher than when the sales were contracted.
“A mill somewhere is going to lose some money because they waited and paid through the nose,” said Howard Simons, an economic consultant and president of Rosewood Trading in Glenview, Ill. “And someone with cotton to deliver will make money.”
There isn’t much cotton left for mills or spinners to buy separately because most of the harvest is headed abroad.
Monday also set a record for trading volumes in cotton, at more than 109,000 contracts, breaking the previous record set Nov. 11, 2010 at 101,516 contracts traded, according to Plexus Cotton.
The catalyst for the rally came Wednesday, when the U.S. Agriculture Department dropped its estimate for U.S. stockpiles of fiber, attributing that to robust export sales. The trend was confirmed in Thursday’s export-sales report, which showed that the U.S. sold 328,000 bales in the week ended May 4.
The higher margin requirements will likely also hurt major cotton merchants. Companies, including Olam International , Cargill Inc. and Louis Dreyfus Co., face tens of millions of dollars a day in margins calls while they wait for cotton mills to fix sales, according to analysts and traders with knowledge of those businesses. The companies didn’t respond to requests for comment.
Margin calls for all market participants were expected to top $262 million Monday, analysts said. The margin calls intensify the standoff between merchants such as Cargill and Louis Dreyfus who have deep pockets and speculators. Many hedge funds and other traders have been piling into speculative agricultural trades, including cotton.
Adam Sarhan, chief executive of investment firm 50 Park Investments, said that cotton has attracted speculative money because it has been one of the top-performing materials.
“Cotton has remained one of the strongest commodities out there and is left with very little competition,” he said.
Analysts say the squeeze in the cotton market is unlikely to lead to the widespread defaults and fiber switching that occurred in 2011, when prices spiked to $2 a pound as China began stockpiling cotton en masse. The price fell back from that as defaults from previous sales lowered demand and mills switched to other fibers.
With about 700,000 bales of cotton left unsold in the current U.S. cotton crop, Peter Egli, a risk manager at Plexus Cotton Ltd. said some merchants are renegotiating contracts with mills.
The merchants are buying back the contracts from the mills and pushing that cotton back onto the exchange, with the hope of finding a buyer who is still betting on rising prices.
Most of the cotton spinners and textile mills are in Asia. Given the recent price rise, “nobody is going to touch U.S. cotton anymore,” said Mr. Egli.
Link:
https://www.wsj.com/articles/speculators-spark-surge-in-cotton-prices-upending-mills-and-merchants-1494891503